No matter how incognito you think you’ve been, they know. They recognize that skunky diesel smell and those droopy, bloodshot eyes. Even if they’re not old enough to understand what cannabis is, they definitely know when you’re baked.

But that’s no excuse for blowing fat bowls of dank kush right in their precious little faces over the quarantine breakfast table. Even during the pandemic, stoner etiquette—parental or otherwise—is essential.

Unfortunately, not all of us have the luxury of a backyard joint sanctuary or a spindly balcony to escape to when we want to enjoy cannabis out of range of our kids. For many parents, the fleeting hours of their child’s school day are the only times they can comfortably smoke weed in their own homes. So how are we supposed to get high when school is suddenly out forever—or at least the rest of the academic year—and children are suddenly our responsibility for all hours of the day?

Even the most secretive parental potheads might reconsider loosening the restrictions on their own consumption. As noted, you’re not fooling your kids anyway. All that’s really needed is to set boundaries. But how does the modern pothead parent navigate those boundaries during quarantine?

As a modern pothead parent myself, I have a few bits of advice to impart.

Designate and Commit to One Stone Zone…

When communal spaces must remain as such 24/7, it’s necessary to name one room as the prescribed weed area. Because we are adults in supervisory roles, running off to hide in a closet as soon as the urge to smoke strikes is not a power move. Resist that compulsion and instead pick the most ventilated room in your house as your “stone zone.” It’s not about hiding your consumption so much as it is making sure you have an appropriate space to consume. Once again, your kids know you smoke weed, so now is a good time to steer the narrative away from shame and suppression and into education and normalcy. If the idea of coming out of the cannabis closet to your children  feels daunting, cannabis educator Emma Chasen offers this advice: “Approach the subject rationally without hysteria or fearmongering,” she says. “It’s important to give young people credit for their intelligence and to let them know that cannabis is a medicine used for a variety of reasons by adults.”

…or Sit in the Car

Then again, there may be times when you need more of a break from your quarantine cohorts than your stone zone can provide. There may also be times when a powerful hotbox is what’s needed to redirect your mood away from cabin fever and toward cabin contentment. If you’re blessed with a driveway neatly tucked beside your home, consider that your new weed annex. Crank up the Peppa Pig, Thomas the Tank Engine or whatever innocuous blather your child is currently obsessed with and sneak just out of sight for a proper five-minute hotboxing. You absolutely will return reeking of herb, but as we’ve established, your kid already knows your stoner ways, and in their older years are likely to look back and appreciate the modest courtesy of not smoking out the bathroom instead.

Camouflaging the thick funk of particularly pungent strains is another way to maintain an agreeable atmosphere post-bong hit. Just stuff a scented dryer sheet into an empty toilet paper roll and exhale through the tube to gently obscure the louder strains and mute milder ones altogether. Consider this a courtesy not only to kids who wouldn’t know a terpene from a fart but also for those in the house with palates refined enough to be offended by a preponderance of caryophyllene. What you do with the dryer sheets once they’ve absorbed enough smoke to lose their perfume is up to you, but know this: They ain’t flushable.

Incense is certainly a lovely way to perfume the atmosphere, but regardless of its ubiquity in headshops, it won’t do much by itself to obscure throaty exhales of today’s pure kush. Sage, palo santo, and cedar all have rich, botanical perfumes that go beyond masking the smell of weed and instead work with the pungent odor of cannabis to create a nuanced tableau worthy of the sophisticated urban bohemian. Sage and cedar can be collected on a quarantine walk, dried out in the kitchen and then used to smudge your home of both bad vibes and stale weed smells, neither of which we need.

Think Outside the Flower

Now is a great time to explore making edibles, tinctures and concentrates for yourself—decarboxylating, extracting and cooking with your own cannabis oil is a skill all committed potheads should have in their tool kit. Even one gram of weed can be successfully extracted and used to infuse as many as a dozen low-dose chocolates, a half-dozen moderately dosed treats or just one huge brownie with the same cannabinoid percentages as the original gram. On days when the kids’ need for attention supersedes the parent’s need to smoke a joint, a bit of homemade medicated fudge can be a game-changer.

Trying to find the right balance of consumption and vigilance is a challenge, but knowing your limits is fundamental to functional stoner parenting. During waking hours, the goal should be “whimsically mellow,” and only detached from reality after the kids are in bed. Low-dose chocolates, gummies and tinctures can all help maintain a smolder of metaphysical comfort without tipping over into full-blown physical intoxication. Quill brand’s full-spectrum CBD vape pen is the perfect product to gently temper overly aggressive THC and coax the user back to earth. 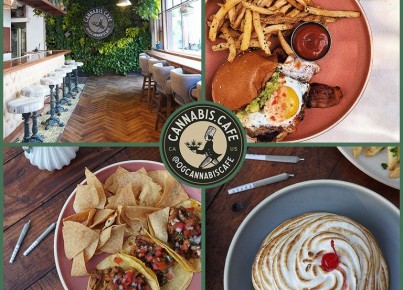 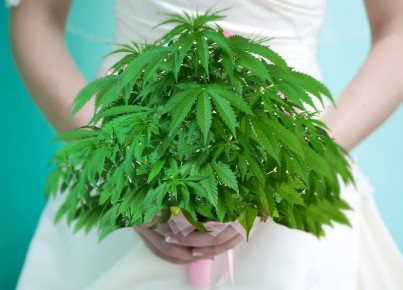 Featured Lifestyle
Weed Weddings: A Match Made in Stoner Heaven